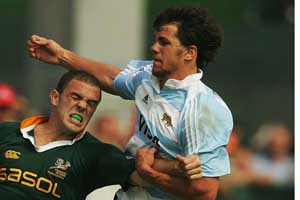 A new face will be joining up with the Saracens squad next week with the club announcing the signing of Argentinian Tomas de Vedia. - 29/11/2006 12:17

A new face will be joining up with the Saracens squad next week with the club announcing the signing of Argentinian Tomas de Vedia.

The 24-year-old winger joins from San Isidro Club in Buenos Aires and was the leading try scorer in the national competition last season.


The 6ft 2ins de Vedia can also play at full back but it’s been from the wing where he has been attracting international attention which has earned him an Argentina A call-up in recent seasons. He has also been a regular on the IRB World Sevens circuit for his country.

“Tomas is a very exciting player and we’re delighted to have him as part of the squad,” explained Saracens Director of Rugby Alan Gaffney. “He’s mainly a winger but can play anywhere in the back three and his record for both club and country prove that he is very good at finding the line.

“He is quick and is a very powerful player and we believe he will make an impact here. It’s a great opportunity for him and also for us to sign a talented young player. He arrives in the country later this week and will join up with his new team mates for training from Monday morning.”