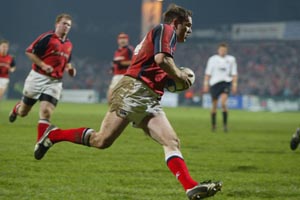 One of the Heineken Cup's longest standing and most successful players

… and Irish wing John Kelly has been with the team every step of the way in establishing that outstanding record on the grand European stage.

But Kelly, who played in both of Munster’s Heineken Cup finals in 2000 and 2002, also knows better than most just what a heart-breaker the tournament can be.

“Munster have played in all 11 seasons of the Heineken Cup and we really enjoy the tournament,” said Kelly, who has appeared in 59 Heineken Cup matches.

“It is a great competition – but it can be a heart-breaker as well, as we know only two well from being beaten in those finals at Twickenham and in Cardiff and that memorable semi-final against Wasps at Lansdowne Road.

“And we are not giving a thought to the final next month. We have got a semi-final to get through first and we know it is going to be a very difficult game against Leinster.

“They showed what a quality side they are by beating Toulouse in Toulouse in the quarter-finals.”

Ireland had two semi-finalists in the 2002 / 2003 tournament – but neither Munster nor Leinster made it to the final that season.

This time, however, Ireland is guaranteed a presence in the final for the fourth time with the winner of the all-Irish Lansdowne Road Sunday showdown taking on either Biarritz Olympique or Bath Rugby at the Millennium Stadium on Saturday, 20 May.

The teams have met twice in this season’s Celtic League, the results going with home advantage as Munster won 33-9 and then Leinster 35-23.

“It is fair to say we know each other very well, which helps in some ways and doesn’t help in other ways – such as there not being much chance of any element of surprise,” said Kelly.

“In fact, it probably makes it harder. You know players like Brian (O’Driscoll) and Gordon (D’Arcy) are very good players and that that is not going to change on the day.

“I accept that after 75 Heineken Cup matches we are very experienced as a side but Leinster have also played in huge games and many of their back line are not only internationals, but also Triple Crown winners and you cannot get much better than that.

“It is great having our experience of the tournament but they have much the same sort of experience so it is pretty evenly balanced on that score.”

Munster, 36-15 winners over Edinburgh Gunners at the weekend, will be returning to the venue of their quarter-final triumph when they beat Perpignan 19-10 in front of a full house.

“The Perpignan match was a very tough one and, no matter how you do it, you just have to win those big games.

“We know it wasn’t pretty but out on pitch they proved to be a hard team who gave us a hard game and winning any game in the later stages of the Heineken Cup has got to be a big achievement.

“When we played Leinster in the Celtic Cup final in 2002 the atmosphere was brilliant but on Sunday there will even more riding on it and to have the crowd virtually split down the middle between Munster and Leinster fans will be great.

“It will be a great occasion for Irish rugby to have two Irish teams in the last four playing in an Irish derby. It proves the provinces are doing well and being competitive.”