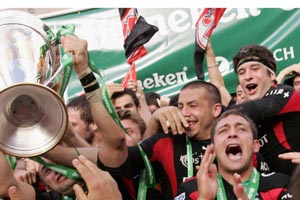 There is no cause for concern at Toulouse according to head coach Guy Noves even though the European champions were condemned to their third consecutive away defeat at the hands of Biarritz Olympique at the weekend. - 14/09/2010 09:28

The judges felt this sponsorship was an outstanding achievement, where the title sponsor Heineken and tournament organisers ERC worked in tandem with Scottish Rugby, EventScotland, VisitScotland and the City of Edinburgh Council and put Scotland on the map for hosting major sporting events.

The 2005 Heineken Cup Final – won by Toulouse against Stade Francais – had given Scotland an international profile where the slick, fully-integrated marketing campaign had played a major role in the event’s success.

Alena Gouldson, marketing manager for tournament organisers ERC, said: “Edinburgh 2005 at the time was considered the best ever Heineken Cup Final and it’s wonderful to receive recognition from the sponsorship industry for the tremendous support we receive from Heineken.

“Following on from the successful Edinburgh ’05 partnership model which was adopted for Cardiff this year, ERC will be working in partnership with the English RFU to create another Heineken Cup Final festival weekend for the London final next year.”

Toby Shaw of Heineken UK said: “The 2005 Heineken Cup Final was a resounding success for Heineken.  The partnership approach adopted in Edinburgh provided an unprecedented platform for activation and is now considered as best practice for future finals.

“The programme of activity from the Heineken trophy tour across Scotland to the Heineken Village in Princes Street Gardens and the introduction of beer sales within Murrayfield itself delivered tremendous value for Heineken.”

David Williams, Chief Executive of EventScotland, said: “It’s fantastic news that the 2005 Heineken Cup Final has won a Scottish Sport Sponsorship Award.  The event, staged at Murrayfield in Edinburgh, is a great example of the benefits to be gained by working in a successful partnership.

“Attracting a crowd of 52,000 to an all-French final is a terrific achievement which generated an economic impact of £12 million to the city of Edinburgh.  Scotland is a premier events destination and the 2005 Heineken Cup Final provides further evidence of the expertise and experience available in this country to host major international events.”