House cleaning day. All morning was taken up getting the house tidied, as we had family and friends coming over for a few days. We also had a late afternoon training session and then it was off to the airport.
I left home at 3.00 for training at 4.00. A 30 minute video session followed by one and a hours’ practice. The backs came in after an hour. The usual, easy job for them, while the forwards stayed out for another half an hour to do scrummaging and line-out work.
Nearing the end of the session I was watching a plane going overhead thinking that was the gang on their way to Blagnac airport. When training was finished I made a dash for the airport to pick up the da (aka The Fanatic) and friends. As I arrived at the airport so did they.
It was very funny to see The Fanatic dressed up in Toulouse hat, Toulouse scarf and Toulouse jacket. I didn’t get to see whether the jocks matched or not.
Among them was Mick Feeney and his son Conor. Mick is a good friend, a neighbour and a former employer of mine for a few weeks. He made his way over to Toulouse under duress from his son, who plays for Barnhall under-18s. Mick has been a GAA supporter all his life and going to a rugby match is a bit like the Pope going to Mecca. In case I had forgotten where I came from he brought along three hurley sticks and a sliothar as a present for me.
It must be something in the water in Ireland these days but even a few Munster fans came over. Paul Collins, Greg Starr and their better halves, Christine and Clare. I had to laugh at the two lads. They arrived wearing Munster jerseys and by the time they went home on Sunday they were wearing the jerseys but with an additional two French berets, each with the Toulouse logo on the front. Rumour has it that they were even shouting for Toulouse at the match.
At the airport myself, the da, the brother Ronnie and my good friend Peter and his wife Audrey headed back to the house to drop off the boys after I organised two taxis for the others into town. A few presents were handed out. Peter gave me a lovely picture of the Wonderful Barn of Leixlip, a 17th century old stone building which is also the Barnhall club crest. The da gave the boys a couple of matching Harry Potter duvet sets which my ma had bought.
We headed into town to meet the others for a coffee in the Cardinal in Place Wilson, just beside the hotel. After that I had organised a meal for all of us in the Killarney pub.
The Toulouse squad were staying in a hotel for two nights but the coach had given me permission to skip the meal and join up with them later in the evening at the hotel. Obviously no drink for me though. It looked like a good night was brewing but I had to watch and dash.

Coming down to the team room in the hotel the first thing I saw was Guy Noves talking to David Gerard, which was a clear sign that he was being left out of the starting team. Myself, David and Finau Maka knew one of us was going to miss out with Fabien Pelous back in the equation.
With the back-row going well they left me in the second-row. I have to say it was the first time in my rugby career I had seen a rugby player brought to tears before a game. I felt a bit guilty, but then that’s rugby. I’ve been there before, and I know what it’s like.
Talking to David later, he told me that 12 of his family had driven down from Toulon for the game and that he felt this was his last chance to prove a point to the French selectors before the Six Nations given France’s problems in the second-row. There were lots of things there.
I rang the lads and a few of them couldn’t remember everything that happened, so that’s always a sign of a good night. I was a feeling a bit nervous about this game because obvsiously there was so much at stake for the club, the supporters and the players.
At the team meeting we were told the match was a sell-out, and that if we won we would have a home quarter-final, whereas if we lost we could end up going to Munster or Wasps in the quarter-finals, or be knocked out altogether.

Match day. We arrived at the stadium one hour before kick-off and the place was choca. Huge crowds were milling around the team bus. I had Christy Moore playing on the walkman but I could still hear people shouting my name and chanting Allez les Stade.
The only thing I could compare this to was playing for Ireland at Lansdowne Road and coming down to the lobby in the Berkeley Court Hotel. The whole place would go mad. There’s nothing like it to psyche you up for a game.
We won the game 33-0. Happy days. Job done. I thought we played well as a team but, again, I wouldn’t be getting carried away. We can play better. I got the full 80 again as Fabien was taken off at half-time and David Gerard came on.
I was very happy with the way I played but I’m just disappointed that I can’t seem to get near the Irish squad. I must have done something wrong to be so far down the ladder. The move to France has made me a better player. I feel I’m playing good rugby and I’d love another opportunity to play for my country.
I’ve been a regular starter since I came out here. For the last few weeks I’ve been playing in the second-row and I’m really getting the hang of it again, so I’d be a good option as a back five forward. If anybody out there knows what I’ve done wrong can they please let me know what it is.
The brother had brought me over two steaks which had been vacuum-packed in Ireland. One of his cutomers had given him the steaks. I asked him who it was and he just said: « look at the label. » On the label was « Lawlor’s Family Butchers _ Two Horse Box Steaks. » That was my old slag name back in my early days with Leinster. « To cook, All the Best Trevor _ James, Greg and staff. »
I brought the vacuum-packed steaks with me to the hotel and gave them to the chef on the Friday night. So while the lads had chicken and pasta, I was tucking into two of the juiciest steaks you could imagine with pepper sauce and a bit of pasta on the side. The lads thought this was hilarious. Well, thanks James and Greg, because the steaks did the trick.
After the match I brought Conor Feeney into the dressing-room to meet the lads and get some autographs, and then gave him ten passes for the aftermatch sponsors’ tent. Normally the players would only get three passes each but the manager pulled a few strings and did a favour for me. When I headed into the tent myself the free champagne and beer was flowing. The family and freinds seemed to be in good form already, and so began a long night…

Met up with everybody in town. The weather has picked up at last, and since Friday it’s been sunny and 20 degrees every day. It feels like summer isn’t far away.
We picked up the six who were staying in the hotel and brought them out to the house for lunch. We had a bit of banter and a laugh catching up on all the stories from the weekend before dropping them all off to the airport.

The French squad is announced and I’m delighted that William Servat, a good friend of mine, is going to be in the 22. Watch out Ireland. William is a dynamic hooker with the ball in his hands, great going forward. He’s in the squad with Yannick Bru, our other hooker, Fabien Pelous, Vincent Clerc, who’s been given a second chance, and Yannick Jauzion. Cedric Heymans and Clement Poitrenaud are in the 34 but have been told they won’t be in the 22 to play Ireland.
We’re playing Montpellier in the French championship this weekend, and a good friend of myself and Paula, Nivard Whelan, is coming out for this game with some of his friends. It should be another good weekend, and hopefully we’ll get the win.
There’ll be no championship games on the weeks of Six Nations matches so we have next week off. I’ll be heading off to Paris and EuroDisney with Paula and the kids.
That weekend the Irish Universities are coming over to play the Toulouse second team and I’ve just had a text from Liam Toland telling me that the Irish Army are coming over to play the French army in Toulouse. So there’ll be plenty of Irish coming over anyway.
The following week Paula’s brother, Eanna, and his wife Catherine, will be coming out to visit us. We have training that week and the club have arranged a friendly match for those of us not involved in the Six Nations.
A bientot. 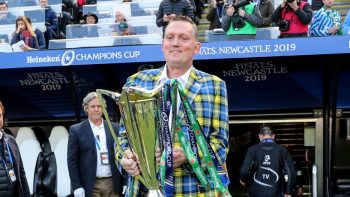 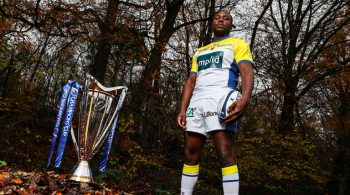