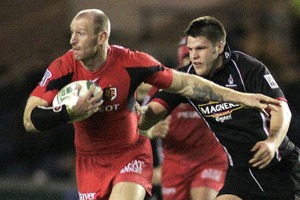 Lions full-back Gareth Thomas has been sidelined due to a neck injury that will require up to three months rest.

Wales and Toulouse back Gareth Thomas has been ruled out of the Heineken Cup quarter-final against Leinster on 1 April, after doctors examined the results of an MRI scan on Tuesday afternoon.

The Welsh captain will be out of action for the remainder of the Six Nations and looks unlikely to be available to Toulouse, as the champions aim for their fourth Heineken Cup final in a row, in Cardiff on Saturday 20 May.


“Gareth Thomas has sustained damage to an artery in his neck, this caused the symptoms that he experienced on Sunday night and resulted in his admission to hospital,” said Wales team doctor professor John Williams.

“We are expecting him to make a full recovery and it envisaged that he will be able to resume training after ten to twelve weeks.”

Thomas who has played for four teams in the Heineken Cup joined Toulouse in 2004. “Alfie” has featured in all but one of Toulouse’s 15 Heineken Cup games since his arrival, scoring four tries.