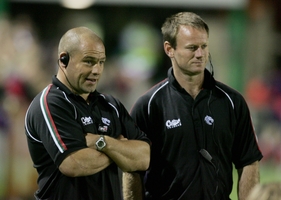 Leicester boss Pat Howard watched his treble dreams drift away as his side were beaten by London Wasps in the Heineken Cup final - 21/05/2007 17:29

Announcing the decision Tigers chairman Peter Tom, said: “Pat Howard was always our first choice. He is one of the most gifted and talented coaches in the world, and together with Richard Cockerill we believe we have a coaching team that can bring further success to Leicester and realise our ambition to make Tigers the best club side in the world.”


The extended contracts will see both coaches at Leicester Tigers for at least one further season.

“We are delighted that Pat and Richard have decided to extend their contracts. This is great news for our players, supporters, and everyone associated with Leicester Tigers.” he added.

This is Cockerill’s second spell with Leicester Tigers, he left on a high at the end of the 2001/2002 season after another Heineken Cup triumph. Howard also enjoyed a successful time at the club as a player between 1998 and 2001; playing 94 matches and scoring 10 tries for the Tigers.