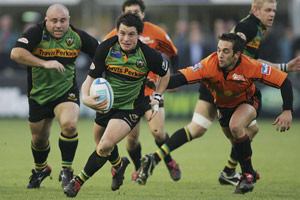 POOL 1
Northampton Saints should confirm their place in the play-offs with a win over bottom-placed Viadana this weekend, but they need a bonus point to guarantee a home match in the next round. Bristol Rugby are at home to French side Narbonne and a win to either side will put them into the mix as one of the best runners-up. Bristol (16 points) are in a healthier position than Narbonne (13), but the English club will be chasing five points


POOL 2
London Irish’s scratchy eight-point win over Rugby Parma in Italy on Saturday confirmed their place in the quarter-finals, but they need to beat Pau this weekend to clinch a home play-off. Pau are a tough outfit, but with only 11 points, they are out of contention and will be the underdogs at the Madejski Stadium. Parma face a tough trip to Agen in the other match and will struggle to avoid finishing last in the Pool.

POOL 3
Gloucester Rugby are in arguably the best position of any of the 20 Cup sides. They have 24 out of a possible 25 points, and their 43 tries will prove valuable if they finish level on points with Newcastle Falcons (42 tries). Gloucester play Bayonne at Kingsholm in the final round, knowing a win will ensure a valuable top-two ranking for the play-offs. The French club are also in a good position and their 20 points should be enough to qualify whatever happens in the last round.
POOL 4
Newcastle Falcons know a win in the last round will clinch a top-two ranking for the quarter-finals, but they won’t have things all their own way in Brive. The French club are sitting on 17 points, but will need at least a bonus point – if not a victory – against the Falcons to play any further part in this tournament.

POOL 5
Worcester Warriors’ 44-8 win over Amatori Catania has edged them ahead of Connacht Rugby on the table, but they will be looking to return from Montpellier with five points this weekend. The Irish province, meanwhile, head to Italy to play Catania, knowing that a bonus-point victory will ensure a spot in the playoffs as one of the best three Pool runners-up. If the Warriors earn only four points and Connacht bag five, the Irish side’s superior try count (21-19) will take them to the top of the table.